Full text of speech by acting President of the Federal Republic of Nigeria,  Prof.  Yemi Osinbajo 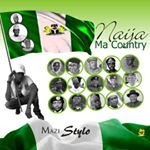 Music is said to give an outlet to our deepest yearnings,this song puts things in context as to the position our nation holds or should hold in our hearts.
Until we as individuals take on the burden of rectifying that which is faulty about the nation, we will not be able to see the beauty of patriotism.
Enjoy the tune...and reflect on your role in moving the nation in the positive direction.